It’s January the 7th and, like many people, I am trying to keep my New Years Resolution. I kept it simple this year – pick one of the many hobbies I have and stick to it.

Over the years my hobbies have included:

A fair few years ago I decided to start baking, I quite enjoyed it and seemed to be OK at it. Looking back at these early attempts they don’t seem as impressive as I remember. Around this time I decided I was going to write about teaching myself how to bake. This lasted on and off for a number of years but I never quite got into the swing of things, so as you have probably realised this is the hobby I am going to work on first!

Instead of resurrecting the old Grace and Flavour blog on tumblr I thought it was a much better idea to start afresh, with a new blog full of entirely new and hopefully humorous (or humourless) posts. So, after a good baking head start at the end of 2016 (many chocolate yule logs), I have jumped into January with a cracking first bake and sat down to put some words on the interwebs that will hopefully make some sense. It’s only taken me a week to do it.

On the lead up to Christmas 2016 I baked many (5) chocolate yule logs. Some were for work, some were for family and one was actually for Christmas day itself. After this, I wanted something different to bake, something I hadn’t done before, something a bit exciting and that is where the gin comes in. I have seen many recipes for gin cheesecakes but for our New Years Day party a cheesecake was not right. So, after a bit of research on The Google – in the pub obviously – I came across a cracker of a recipe on Netmums.

While the recipe is called Gin and Tonic cake, it’s more of a Gin un-tonic cake as it’s missing one ingredient – the tonic! With 4 shots of gin it’s a bit more of a boozy cake then I am used to and, having not baked with booze before, I was a bit worried about how the mix itself should look. It turns out just a bit curdled looking – though having nothing to compare it to I am taking that as how it should look before you put it in the oven.

After ages in the over (about an hour) it was time to see how the cake looked. My loaf tin is actually silicon so it had spread and was more fat than it would have been if baked in a proper tin. Other than that and a bit of a ‘well done’ bit I removed from the top, all in all it was quite a successful first foray into boozy baking.

With the gin in the cake it was already quite a cake but the drizzle called for another 6 shots and a bit of icing sugar. Once that was mixed and then slowly over a number of hours drizzled over the cake there was no worry about it being dry. I was more worried it would just collapse in the corner, similar to me if I had 10 shots of gin!

The final verdict – it went down well, very well and was a great addition to the New Years Day buffet table. Not one for the kids but one the adults enjoyed, and I continued to enjoy for a number of days – but no eating cake and driving!

PS – Not entirely sure why I have made it look like I am sacrificing the cake, this was not intended. 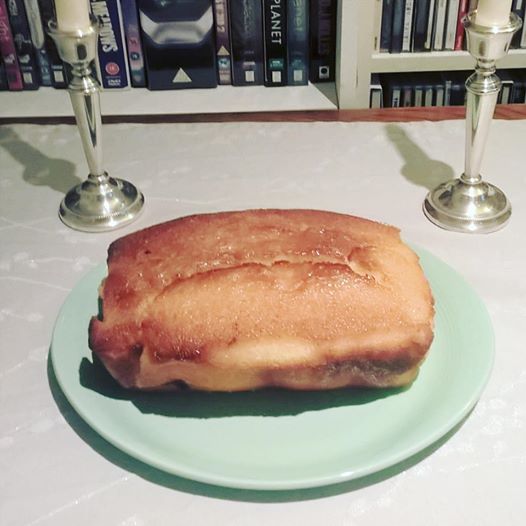 1 thought on “New Year Resolutions and the Gin Cake”

What’s this all about?

Most people who bake, especially those who have a cooking or baking blog of some sort, would say the kitchen is their favourite room in the house (or very small flat). Lets be honest, mine is the living room – it’s where the telly is and nice big leather sofa. Though I am quite fond of my kitchen, especially since it was completely ripped out and refitted, its a close second in being my favourite room in the house (out of 5 rooms).

So what’s all this about?

Good question and one I hope to answer at some point. I am guessing it will be general ramblings about food (and booze), baking (and booze), cakes I’ve bought and eaten (and booze) and anything else that pops into my head when I actually sit down to write.

So sit back, relax and enjoy (humour me)